Two Chicks in a Hammock

Once upon a time, two chicks were hanging out in a hammock. Today, Michelle Jones and Katherine Crosby are taking over the island with their Backyard Juice, Hawaiian Salt, Hawaiian Chili Pepper Pickles, Bread and Butter Pickles and Dill Pickles and even a new food booth! 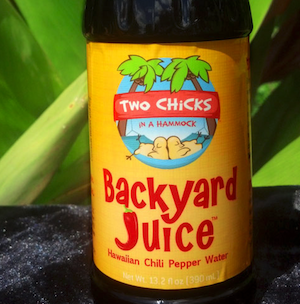 Backyard Juice Hawaiian Chili Pepper Water is the original product from Two Chicks in a Hammock, and according to their website, it’s their version of traditional Hawaiian chili pepper water. “It goes well on all kinds of fish, dried, cooked or raw, grilled steak, grilled veggies, noodles, seafood such as shrimp, opihis (limpits) and oysters, as a marinade for any protein, including tofu, as well as in stir-fry’s or on eggs or rice to add a kick of spiciness. Our chili water is made on Maui from mostly all local ingredients and sold in locally made bottles.” In 2014, they also unveiled a gluten and preservative-free version made with non-GMO, low sodium San-J brand tamari that sells at natural food stores.

I kept hearing about Two Chicks at last month’s Startup Weekend with the Waikapu Pickle Team (more on that one later) – “Those ladies are killing it!” I heard. “I think they’ve even quit their jobs!” was the rumor… turns out that’s only half true… And they were kind enough to donate to my basket of Made on Maui items for the Carden Jamboree, so yes, it was time to the Two Chicks blog post.

So here it is…

Maui Made: There’s a rumor going around that you’ve quit your jobs and this is now your full time gig… any truth to that?
Michelle Jones: It is my full time job as of December 2014. Kat is still working for the State of Hawaii Department of Land and Natural Resources. I was a case coordinator for Easter Seals Hawaii before this. We started this company in January of 2013 and bottled our first round of Backyard Juice Hawaiian Chili Pepper Water (the original recipe) in June 2013. It just got to the point where I was working on Two Chicks stuff until 10 at night and I had to take the risk and do this full time.

Kat preps for the food booth

MM: Where are you making your products?
MJ: We make our products and food at the Lokahi Pacific Kitchen

MM: Tell me more about the new food booth!
MJ: We started our Pork, Chicks N’ Picks food booth in December 2014 selling our smoke pork, rosemary chicken, spicy, dill and bread n butter pickles, seasoning salt and Backyard Juice. We are at the swap meet, Kihei 4th Friday, the Ag Festival, and various concerts and festivals. Soon we will have a set roadside spot each week as well. It is going well. People are getting to know us and come back to tell us how much they enjoy the food.   We are also offering our smoke meat, rosemary chicken, pickles and garlic brussel sprouts for parties in advance! 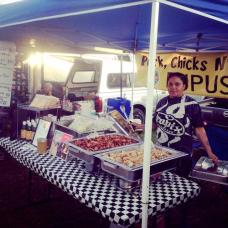 MM: What’s the hardest part of running a small business in Maui?
MJ: I would say that shipping costs from Oahu and back is the worst thing. Having our printing done locally costs more than it would on the mainland but we strive to use all local businesses when we can’t do something so that is one of the hardest things financially. There are lots of rules when making food for stores and the public and you have to be super on it to make sure everything is done legally and safe.
MM: How was the Made in Maui County Festival?  Are you going again this year?
MJ: We had a great experience at the Made in Maui festival last year as well as the Made In Hawaii festival on Oahu. Great exposure to local people and tourists as well and a great chance to talk with store reps and distributors. Yes, we are going again this year! I would recommend any local company to attend because of the exposure and sale opportunities.
MM: What’s next for Two Chicks?
MJ: Getting into more and more stores with our products now that we have a distributor. We won Second Place for our Hawaiian Chili Pepper Salt at the Ag Fest and will soon be selling our salt, pickles and Backyard Juice to stores and restaurants wholesale. Our food cart will be going full time (probably Tuesday-Friday) in Haiku in the next month or so. We just got accepted into Foodland and Safeway statewide so will be delivering to them this month. At that point we will be in 92 stores all together.

Kat and Michelle at the Maui Ag Fest
—
To Order your Backyard Juice or Hawaiian Chili Pepper Salt online, check out their website, or check out their extensive list of locations here!
Congrats, and mahalo to Michelle and Kat for sharing their story! I hope that you two get some time to relax in that hammock!!!