I Survived the Maui to Molokai SUP Race 2014!

I survived 27 miles of choppy seas, gusty tradewinds and mid-day tropical sun!  It was physically taxing and mentally tiring, and I wasn’t even racing!  I was a support person aboard one of the escort boats.  (click on any of the below images to view them a bit larger – sorry they are not the best, taken with iPhone on a bumpy boat ride!) 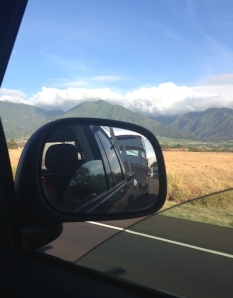 The boat in the mirror is much larger than it appears…

Let me explain.  We have a boat.  It’s day job is a fishing vessel, but it moonlights with a much more exciting profession – escorting big wave surfers to Jaws during the winter months, and long-distance paddlers for channel crossings in the summer.  Normally I am “at home with the kids” or “working” but when an opportunity came up to crew on the boat, escorting several time World Champion and neighbor Kai Lenny on the M2M2014 (Maui to Molokai Stand Up Paddle Race), on a day when the grandparents (MAHALO) could watch the kids, I jumped at the chance. 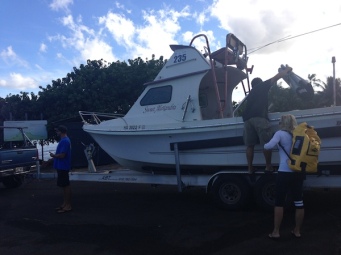 mala ramp looking a bit less like a lawsuit waiting to happen!

Getting Focused before the race

Now, I’ve been neighbors with Kai and the Lennys for years, and even lived next door to the family when the boys were little bitty kids, but I wasn’t sure what to expect from a guy (man?) that has traveled the world, is a champion in many water sports, and has recently been spotted around the island with celebrities ranging from the cast of Pretty Little Liars to rockers fromThird Eye Blind.  What I discovered Kai is friendly, humble, and the only thing deeper than his amazing work ethic and dedication is his love for his family.

What wouldn’t surprise anyone who has followed Kai’s amazing story is that his most loyal fans, his parents, were on board, but the amount of mutual love and respect that I was able to witness close up (it’s a pretty small boat, especially on the trip home) was just palpable, and as a mom of two young kids, inspiring.

Kai gets a hug from Dad at the start of the race!

Mom looks on with binos at the start of the race!

The original intent of this trip was to be able to report back about the behind-the-scenes aspects of the race, and the duties of the escort boat, but the emotional journey that I took, picturing my own son, now three, spreading his wings and going on his own adventures, and hopefully being able to experience just a part of it with him, was just so much more exciting!

I will say – the repairs at Mala Ramp were definitely appreciated, Honolua Bay is just gorgeous, the start of the race is very exciting, and  – if you are going to be an escort boat – being with one of the top finishers is the way to go!

Just before the Start

I have actually never been to Molokai before, so to journey almost the whole southern length of the island and step just a few feet (enough to find a bathroom!) at Kaunakakai Harbor was a great adventure, and I would love to venture back to the island some day!

The race between the top four finishers, Connor Baxter, Kai Lenny, Dave Kalama and Travis Grant, was quite intense, it was almost like two separate races – the top four and then everyone else!  At one point in the middle of the Pailolo Channel, we could see the top four, all pretty close, and literally no one behind us. Not even the escort boats.

Three of the Top Four finishers sharing one swell after the start.

The Top Four – Kai, Travis, Conner and Dave (click to view much larger!)

As our sweet boat, actually named Sweet Alexandra, is accustomed, especially when at Jaws, there was a photographer on board.  This time was a new twist, a new, locally based drone-photography company, EPiC Aerial Productions joined the crew.  Justin and Nana, who started EPiC earlier this year, dreaming of one day filming Kai paddling the open ocean, and in a typical, yet magical Maui moment, they just so happened upon Kai’s backyard one day, and the rest is history.   Click HERE to see EPiC’s YouTube Video of the race! 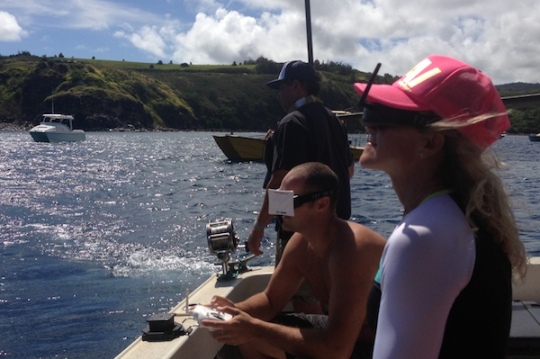 Justin flys the drone as he and Paula watch what the camera sees in special googles!

The boat captain, Matt (my husband) is an amazing multi-tasker and thrives on adrenaline, always performing best under pressure.  While this might not be quite as anxiety-ridden as driving a boat next to 60-foot breaking waves, while the photographer is demanding you ‘get closer!’ and the boat is loaded down with thousands of dollars of not only surfing gear, but camera equipment, escorting a paddle race has numerous challenges.

You need to stay near your paddler, but not too close.  You need to monitor the race course and recommend a track (unless there’s a coach and navigator on board). You need to watch out for other paddlers, boats, debris, etc in the water.  You need to make sure everyone on board is staying safe, with arms, legs and heads inside the boat. (this is amazingly difficult, we witnessed another boat with a passenger fall off, and I just read a report of someone falling into the same boat when boarding after the race). You need to make sure there is ample cold Coors Light to reward of-age racers at the finish line.  (ok, the crew is responsible for this- but someone needs to pack the cooler and ice)

dave and kai congratulate each other

smiling for the camera! 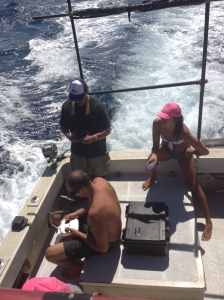 Watching the launch of the drone from the flybridge

Back to the multi-tasking captain – as if all this isn’t enough, add in a photographer, looking to get the perfect shot.  Then, to add another level, the photographer is flying a drone, which needs to be launched from and landed on the boat – which is bobbing and swaying in the rough ocean – oh, and the drone is NOT WATER PROOF!

I once asked my husband, as we were driving up the hill in the middle of the night in yet another tsunami evacation, with one sleeping kids and one almost 9 months along in my belly, “Isn’t your adrenaline pumping?” His reply “Not unless I’m in mortal danger.”

All in all, Justin and Nana of EPiC Aerial were able to successfully launch and land the drone THREE times!  I can’t wait to see the footage.  I hope to add it to the post in the future, but make sure to follow Maui Made on Facebook for notifications.

Justin and Nana wisely chose to ride the Molokai Ferry back to Maui, as Sweet Alexandra was loaded down with two very long SUPS, Kai and his parents, Jerry Bess, Captain Matt and yours truly, for a bumpy ride, all huddled inside the snug and dry cabin, all the way back to Mala.  Everyone returned with enthusiasm for the next Hawaiian adventure – Molokai to Oahu, which takes Captain Matt three days all told.

Want to see more pictures from the day? Here’s some more highlights: 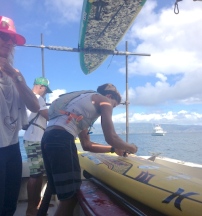 Attaching the GoPro to the board.

a rare selfie… too cool to pass up

i was really there!

kai working for each glide, but really making it look easy!

Justin flys the drone as he and Paula watch what the camera sees in special googles!

One of the top comments that I have received on this blog is ‘Where can I buy eskyflavor Hats Online?’ Well folks, I’m excited to tell you all that FINALLY, there’s a shop that sells these super hot and trendy trucker hats online –

UPDATE AUGUST 2017: I’m not sure when all of this has occurred, as this is not my primary blog at the moment, but you can now order eskyflavor hats online, directly from their own website!

Click on this image to get your eskyflavor on!!!

eskyflavor hats are made by the Maui-based artist Mickey Eskimo.   To see more of Mickey’s wide array of talents, check out this earlier post .

While you are shopping for cool Hawaiian trucker hats, we also want to share the super hot Sea Sea Aloha hats: which feature more feminine floral designs, with the outlines of specific Hawaiian Islands hidden in each design!  You have a couple ways of ordering these hats:  you can order through Beach Wahine

How do you wear a flower tucked behind your ear and a trucker hat at the same time? Sea Sea Aloha! 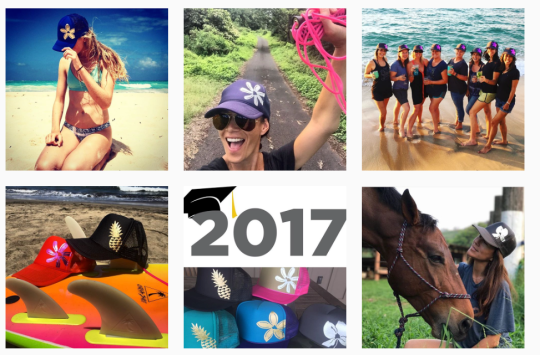