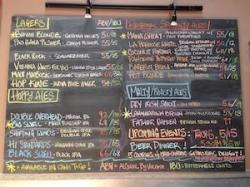 Maui Brewing Company is hitting the road, and North Shore residents will be stoked to learn they are bringing their brews to Paia for some special events in honor of American Craft Beer Week!  I’ll admit, the call of the enormous chalkboard filled with delicious varieties of beer is sometimes enough to get us to drive over an hour… but it will be much more convenient for them to bring their beers to me!

On Sunday, May 11, (Mother’s Day!) Maui Brewing will be taking over the taps at Flatbread, with their flagship brews of Bikini Blond, Big Swell IPA and Coconut Porter, plus 5 limited releases all on tap.  The limited releases will be La Perouse Belgian Wit, Dry Irish Stout, Shifting Winds Belgian IPA, High Standards IPA, and Vienna Waits for You, a Vienna Lager named after the Billy Joel song.  The beers will be there all day (as will the pizzas) – and the Maui Brewing crew will be there at 6pm…

On Wednesday, May 14, from 5-7pm, Maui Brewing Company will be taking over the taps at Dazoo Restaurant!  Special pupus and beer cocktails will also be on hand!  Follow on Facebook to find out more about the timeline of the event.

A handcrafted India Pale Ale brewed with four different kinds of Northwestern hops and malted barley…dry-hopped to perfection. Its flavor begins smooth and malty and is followed with a big burst of hop flavor. ABV 6.8 | IBU 82

Brewed with Blood Orange Puree and local citrus and a heavy amount of Azacca, El Dorado and Sorachi Ace hops to compliment the citrus. A very large beer but deceptively smooth and drinkable.  ABV 9 | IBU 70

It is a stronger version of a German-style bock and has a deep ruby color with a chocolate and dried cherry aroma. This lager is known for its low hop bitterness and intensely rich caramelized malt profile. ABV 8.5 |  IBU 18

The Imperial CoCoNut PorTeR is a stronger version of MBC’s robust porter, spiced with all natural toasted coconut. It is black in color and crowned with a creamy, dark tan head. It begins with a malty, toasted coconut aroma followed by a rich, silky mouth feel with tastes of dark malt, chocolate, and hints of coffee. ABV 9.4 | IBU 35

And finally, next weekend is the return of the very popular Maui Brewer’s Festival at the Maui Arts and Cultural Center!

Disclaimer: I am a paid spokesperson for Dazoo.

Maui-Designed Cover Up Featured on The Grommet